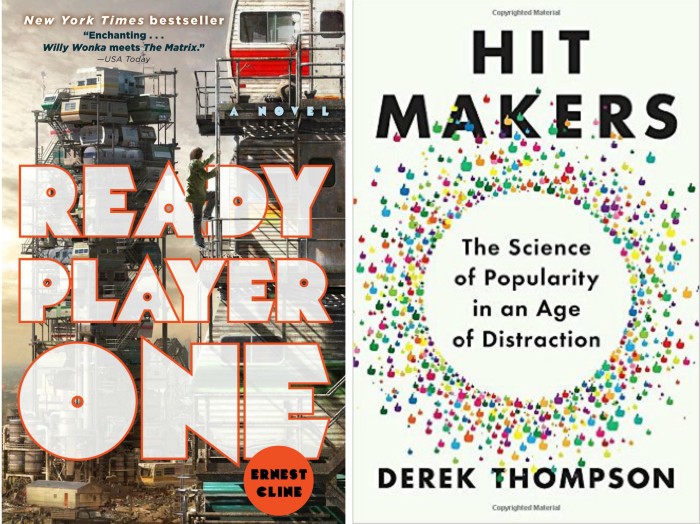 A few years ago I noticed that every bookseller I spoke to at Elliott Bay Book Company recommended Ready Player One, Ernest Cline’s novel about a kid who lives much of his life in a virtual world designed by a 1980s pop culture-obsessed game designer. I read it in a few sittings and enjoyed the hell out of it. It had what I like to call idea density–a steady flow of new information that kept me interested the whole way through. The pacing was tight, the protagonist easy to like, and the cultural references continually pressed my Gen X nostalgia buttons. If you pay attention to the goings on in the VR industry, you’re probably aware that Ready Player One is given to every new hire in Facebook’s Oculus division, and that Stephen Spielberg’s adaptation hits theaters in a year or so. It’s a wildly popular book.

I have been recommended Ready Player One by teenage girls and forty-something year-old men. Recently, my girlfriend recently finished the audio version and it came up during a discussion I had with young game designers at the Academy of Interactive Entertainment. Published in 2011, the dystopian novel shows no signs of receding gently into the forgotten realms of our culture. But why is the book so popular?

Awhile back Ron Jones of Sky Muse Studios recommended that I read Hit Makers: The Science of Popularity in the Age of Distraction, by Derek Thompson. Ron composed music for television for forty some years in Hollywood and knows more than a little about creative hits and misses. I took him seriously when he said that this book distills hit-making down to a science.

One of the main ideas in Hit Makers is a principle called MAYA, for “Most Advanced Yet Acceptable.” We gravitate to art works that simultaneously reminds us of what we already know and offer some new, novel twist.

A couple weeks ago, in my ongoing effort to impress upon my kids just how awesome the nineties were, I showed them Forrest Gump, which I hadn’t seen since it had been in the theaters. The movie is a constant bombardment of the MAYA principle, crammed full of cultural touchstones, with a soundtrack that was so extensive it came out on two CDs. Elvis, the Civil Rights movement, Vietnam, the druggy seventies, the eighties’ fitness craze, AIDS–it’s as though the screenplay was composed by flipping through thirty years of Time magazine covers. The novel twist was that this simpleton had been present during all these various historical moments.

Ready Player One is like Forest Gump but focused on a single decade and in virtual reality. Ernest Cline and I are about the same age, and his references to Dungeons and Dragons modules, Joust, Rush, and John Hughes movies lit up the parts of my brain that developed in the years when I wore my hair in a mullet. One meta layer of the novel is that VR itself is a bit of a late eighties nostalgia button. I remember where I was (Dave Cornelius’s history class) when I read the article in Rolling Stone about Jaron Lanier and VR.

I read somewhere that Millennials often read Ready Player One with a nearby screen open to Wikipedia. Having lived through the era of parachute pants, I didn’t need to. So if adults younger than me didn’t enjoy the book because of the eighties references, why do so many continue to cite it as one of their favorite books?

Here’s where Cline is truly ingenious. In his novel, the MAYA principle works on multiple levels, hitting you in different ways depending on how old you are. If you’re a forty-something like me, you enjoy the book for its references to Ferris Buehler’s Day Off and relive your own adolescence through Wade Watts. But if you’re a Millennial, the thing that’s familiar is the experience of submerging yourself in digital facsimiles of reality, of screens, of friends who exist exclusively online. The novelty–the thing that’s new–is the trove of eighties pop culture.

Cline achieved a remarkable feat, writing a novel built upon a dual MAYA system that adapts to the reader. I’m in awe that Ernest Cline pulled that off, and intrigued to witness how this story further cements itself in popular culture.