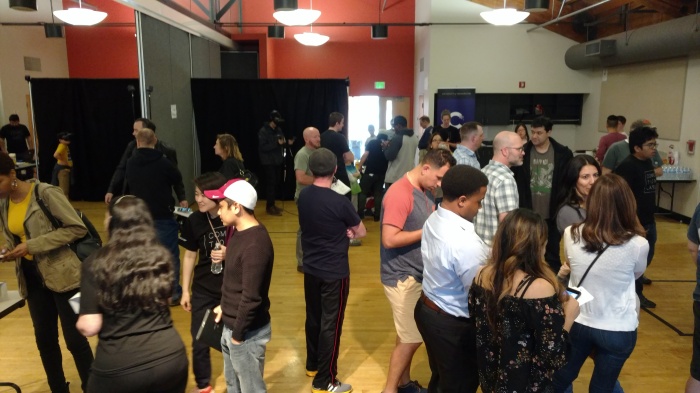 A bunch of people getting their minds blown by VR and AR at Newholly Community Center.

Yesterday, at the Newholly Community Center, dozens of people came in from the  sunshine to try out VR and AR, many for the first time. The event, billed as south Seattle’s first VR pop-up, was organized by CoMotion Labs, Washington Technology Industry Association, and the city’s offices of Economic Development and Film and Music. There were stations to try out Vives, Hololens, Theta cameras, and the Oculus Touch. Presenters included Evie Powell, Ryan Smith, Paul Jackson, and Lacey Leavitt. I gave a somewhat rambling presentation about the history of VR in Seattle and the local ecosystem. This was especially meaningful to me because Newholly was my neighborhood for a dozen years.

There’s this look certain people get after their first VR experience, a sort of stunned recognition of the potential of this new medium. Yesterday was an acknowledgement of a growing VR community that’s welcoming to newcomers. Over and over I heard variations of a theme–if you want to take part in this industry, it’s still very early, Seattle is the right place to be, and there’s plenty of room for your voices and ideas.

After my talk, I had enlightening conversations with KUOW reporter Jamala Henderson, a young woman from China who just received her BA in business from the University of Washington, and Robocognito’s Sean Siem, who, I learned, happens to live on a street where I used to live. Everybody I met was alive to the potential of immersive media, thrilled at the prospect of getting more involved in its creation, and animated by a sense of possibility.

The VR pop-up was a reminder that the emergence of immersive media coincides with new consciousness about inclusion and the strength of diverse communities. Newholly, just minutes from downtown Seattle, is a development in the most diverse zip code in the United States. I always appreciated the not-a-big-deal demographic makeup of the neighborhood, where gay couples, transracial families, Muslim Americans, and white dudes like me all share the same parks and check out books from the same library.

VR will only become more transformative as people from a wide spectrum of backgrounds embrace it. Touted as an empathy tool, VR grants us opportunities to experience life in one another’s shoes unlike any medium that has come before. What’s beautiful about diverse communities, to me, is the sense of common purpose that can rise from them. Sharing VR experiences with people who are superficially unlike yourself is profound, and discovering the things we have in common is beautifully moving. Yesterday, the message conveyed at a community gathering place in one of the most technologically progressive cities on earth was that the future of this new medium belongs to all of us.