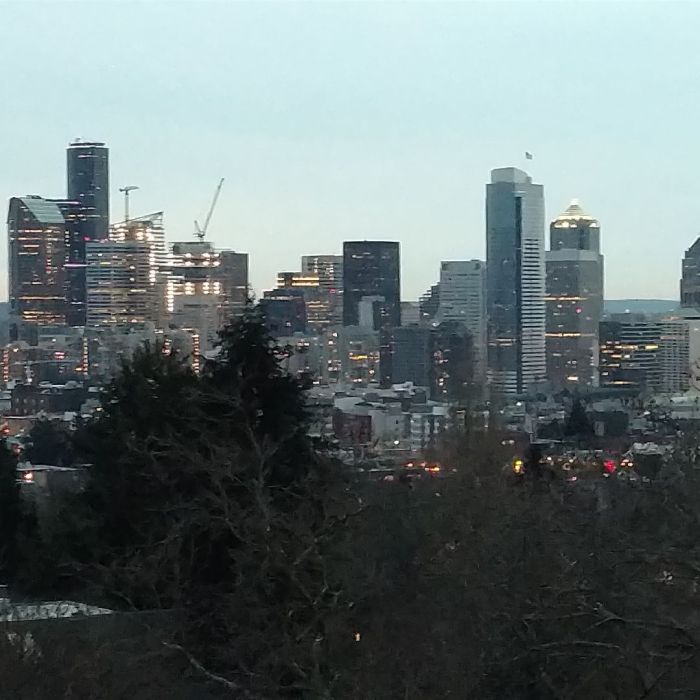 The Seattle skyline from the Volunteer Park Water Tower.

I can’t help but think that there’s a connection between the number of construction cranes punctuating Seattle’s skyline and a recent report that various species of North American trees are migrating west.

I count cranes every time I’m stopped in traffic within view of downtown Seattle. Sometimes, from the ship canal bridge, I can spot a dozen. Heading in the opposite direction, looking out over the University District, I can count five or six. I reflexively count cranes now, aware that I’m witnessing a significant period in the history of a city that, at the time of its founding, expressed ambitions to overtake New York in size and clout.

Reports that forests aren’t just inching northward in an adjustment to climate change, but are gradually moving west, makes me wonder if they know something we humans don’t. Perhaps American civilization’s center of gravity is moving away from the east and south. The progressive welfare states of Scandinavia and tech hubs of Asia share more cultural affinities with the Pacific Northwest than the intolerance and religious fundamentalism of the South. In my darker moments I wonder if a Christian streak of violent fundamentalism has already begun to take hold of many corners of America. I worry that the rise of ISIS-grade fundamentalism will come to define those parts of the country where voter suppression is now blatant and routine. I look to Washington, D.C. and behold a madhouse lorded by Bond-caliber super villains. I take that back. Austin Powers-caliber super villains.

Then I see my beautiful Seattle and swoon. I have lived here for twenty years, and in the twenty-four years previous never lived more than an hour away. I remember the Seattle of the pre-web eighties as charmingly dorky, defined by Ballard’s Nordic humor and Gary Larson’s Far Side cartoons. Seattle knew it wasn’t cool and greeted that knowledge with a shrug. The personality of Bill Gates and Mark Arm’s sneer (“I’m a creep! I’m a jerk!”) exist on a continuum of unpretentiousness that you can still find in Full Tilt Ice Cream shops and the non-fashions of morning bike commuters. Not caring what other people think has long been the Pacific Northwest’s contribution to American culture, while simultaneously distancing it from that culture.

We know that we exist in a progressive bubble in Puget Sound, and the tides of national politics seem to reinforce that bubble’s membrane every election cycle. Can you imagine a politician from Seattle becoming President of the United States? I can’t. Or I can’t imagine that this would happen without a lot of media hand-wringing over whether some latte-swilling tech entrepreneur from Bellevue would be able to connect with “real” Americans. It’s easy to imagine a pundit on Fox News: “Can a candidate from ultra-liberal Seattle connect with real Americans? Well, Anderson, when you’re on the national stage you have to be able to make your case with rust belt voters, the rural whites who have been most hurt by this economy, and I just don’t see someone from the privileged and—let’s face it–snooty Northwest sealing the deal with hardworking Americans in places like Scranton or Buffalo, New York.”

And yet the cranes keep rising and the trees are inching their way toward our corner. As the region amasses more technological and cultural equity, the Pacific Northwest has begun making more pointed contributions to the nation’s history. When Trump unleashed his first xenophobic travel ban, it was Washington State Attorney General Bob Ferguson who led the effort to strike it down. Recently, before they bought Whole Foods, Amazon opened its first brick and mortar bookstore in Manhattan, scandalizing New York’s tradition-bound publishing industry with its profusion of algorithmic recommendations and data-based merchandising.

Even Twin Peaks is back on the air, or rather available anew in streams via Amazon Prime and elsewhere, delivering the coniferous folds of the Cascades via the cloud. The new Twin Peaks has embraced a more expansively American voice, with scenes set in New York City, South Dakota, and Las Vegas in addition to the mysterious mountain town near the Canadian border. It’s as though David Lynch predicted an opportunity to address our absurd national moment, the Trump era, which resists feeling anything close to real. Maybe the weirdness-embracing Pacific Northwest is constitutionally strong and stoned enough to confront this period of the American experiment.

You smell marijuana smoke everywhere in Seattle. Clouds of dank float over the sidewalks and in the bus tunnel. You smell legal weed on the ferry, at Seattle Center, and especially in parks. It’s rare that a society decriminalizes an intoxicant, and cannabis has been enthusiastically embraced by adults of all ages, races, and socioeconomic circumstances all over the Pacific Northwest. Small towns in Snohomish and Pierce counties feature a legal weed shop or two alongside their bikini espresso huts. When it comes to cannabis, the Northwest shrug is well in evidence, suggesting we’re light years from the calcified beliefs of US Attorney General Jeff Sessions, who recently expressed surprise that more people didn’t share his conviction that marijuana is a public menace.

I’m obsessed with the city’s early founders who wished to call this muddy settlement New York Alki. Alki being Chinook for “by and by,” meaning “someday.” It occurred to me recently that if you were to transport any of those founders to Volunteer Park’s water tower today, with its 360 views of the city to the west and Cascades to the east, they’d readily exclaim that their civic ambitions had come to pass. Then they’d probably wonder why women are allowed to wear pants.

In 1850, the population of New York City was 515,547. Today, the population of Seattle is around 700,000. This is the city that invented airplanes, then software, then used that software to invent a way to order things that could get transported to your door via those same airplanes. We changed the way people drink coffee. After losing the world’s greatest guitar player to London in the sixties, we gave popular music a blood transfusion in the nineties. Three out of four foundational grunge bands tragically lost their singers, a generation of Icaruses kissing then being consumed by the sky.

This Memorial Day weekend, I accompanied my girlfriend and her daughter on a ferry ride to Bainbridge Island, the NPR-loving boomer bedroom community with good schools and restaurants. On the return trip we were treated to a vision of the city in panorama, a skyline in parentheses–the Space Needle to the left and the stadiums to the right. A gathering of people pointed off the port side of the vessel. My companions and I speculated about what they’d seen and concluded it must have been an orca, but by the time we sidled up to the green railing the mammal had returned to the seascape under the surface. We spotted seals and counted the cranes as we approached the skyscrapers.

Geologists and the merely paranoid claim we’re overdue for an earthquake. The Big One. I imagine the resulting tsunami several times a week. In especially morbid moments I wonder if one day I’ll survey this landscape for its ruins, its fields of debris, its acres of dead. If I’m home on Capitol Hill when it hits I should be safe, I think, unless the bricks of my apartment built in 1936 by a self-taught architect can’t withstand it. Then there’s the slim to none chance that Kim Jong-Un will lob a nuclear warhead our way, a scenario that’s not without a certain sick entertainment value.

Let’s not forget that we’re standing astide a chain of volcanoes, one of which blew while I was walking from my kitchen to the living room–peanut butter and jelly sandwich in hand–in 1980. The eruption of Mount Saint Helens confused me. Even though the mountain was in Washington State, I saw none of the ash that blew south. Months after the eruption, visiting Portland, I walked with my mom through neighborhoods where the ash was still piled in little drifts along the curbs.

What stuck with me most about the eruption of St. Helens was footage I saw on TV of a law enforcement officer talking to an old man who lived on the mountain named Harry Truman. When, in the seismically dicey weeks before the eruption, the officer informed Harry that it was time to evacuate or meet certain doom, the old man replied that he’d buried his wife on this mountain and wasn’t about to leave her. At the time this struck me as a valiant act of devotion, an expression of love for a place so strong that you’d rather let it kill you than abandon it.

That’s what it feels like to live in Seattle right. Pre-apocalyptic. Wired, wireless, and high. Uncertain of the future yet agape as the future pulls us up toward the sun.