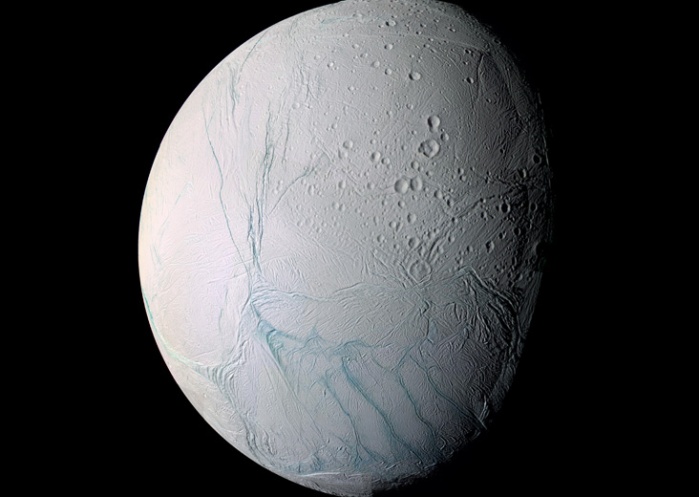 Enceladus, one of Saturn’s moons, which spits geysers out of its “tiger stripes”

Go outside and locate a three-story building. That building is about as tall as the typical ring of Saturn is thick. This was one of the fascinating things I learned watching Kingdom of Saturn: Cassini’s Epic Quest on Amazon Prime last night.

When you’re a kid and you’re drawing Saturn, you typically draw a single ring. You learn that the ring is actually many rings composed of debris that orbits the planet. Now, thanks to the Cassini probe, we know more about the composition of these rings than  every before. They’re like the grooves on an LP that’s encrusted with bits of dust. But they’re also dynamic, rippling, throwing up occasional cathedrals of ice, disrupted by the gravitational fields of the moons embedded within and among the rings. These moons are mind-bogglingly weird; some of them are ocean worlds. The most fascinating of these is Enceladus, which occasionally squirts jets of liquid saltwater from cryovolcanic fissures that resemble tiger stripes. When Cassini passed under the spray of this moon, it determined that this shower of material was rich with the ingredients necessary to sustain life as we understand it.

There’s also Hyperion, which looks exactly like a chunk of Carribean corral. This sponge-like moon is pock-marked by the impact of countless meterorites, which apparently lodge within the core of the moon. Imagine a squishy fruit with a hard seed inside of it. Crazy! Or how about Mimas, discovered in 1980, which happens to sport a crater that makes it a spitting image of the Death Star.

Earlier this week I suggested that the highest purpose of artificial intelligence will be to seek and propagate life throughout the rest of the universe. It’s easy to forget how rudimentary even sophisticated probes like Cassini actually are. I imagine a day when AI-empowered, quantum computer-driven probes will render fully explorable virtual models of celestial bodies for us on earth. These probes will be able to determine if there is nascent life on places like Enceladus, and whether to leave it be or contribute to its development. They’ll be able to expand our understanding of what conditions are required to sustain life, and find planets and moons that would be ideal candidates for terraforming. We’ll set organic processes in motion, so that one day sentient, tool-using life might emerge, eons after the shadow of humanity has faded.