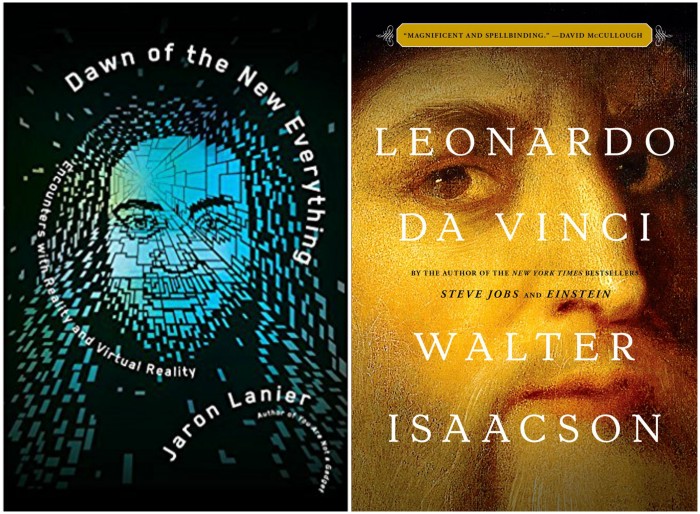 Navigate to the intersection of art and science and you’re liable to run into weird visionaries. Two recent books, which I read back to back, suggest that the art-science mashup has been the province of radical thinkers since at least the fifteenth century.

Walter Isaacson’s illuminating biography Leonardo da Vinci walks us through the Renaissance master’s oeuvre, which consists of a total of 15 known paintings and numerous notebooks filled with sketches and backward Italian text (Leonardo was left-handed and wrote this way to avoid smudging the pages). Along the way we meet such figures as Niccolo Machiavelli; the fiery young challenger Michaelangelo; the Tarantinoesquely cruel Cesare Borgia; Cecilia Gallerani, the beauty who sat for Lady with an Ermine; and Leonardo’s hot boyfriend Salai, who had a reputation for getting wasted and breaking shit at parties.

Against the backdrop of Renaissance Florence and Milan, mostly, da Vinci honed his observational skills, driven by insatiable curiosity for how the world operated and appeared to the senses. He observed that the world doesn’t appear to us rendered with sharp edges, so pioneered a new way of painting called sfumato, in which the borders of objects subtly and softly fade. Intent on understanding the inner workings of the human body, he dissected and illustrated the anatomical features of numerous cadavers in an era long before refrigeration. He designed weapons and irrigation systems, and never tired of drawing swirls of water or ringlets of hair.

We tend to take da Vinci for granted, another dead white male genius. When I was in college I asked a friend, an art student, what was so great about the Mona Lisa. Having read this richly illustrated page-turner, I think I’m finally beginning to understand. Isaacson contextualizes da Vinci’s accomplishments and keeps toggling between the artist as scientist and the scientist as artist. Isaacson’s great biography of Steve Jobs and his chronicle of the history of computers, The Innovators, latched onto this theme as well, with Leonardo da Vinci advancing a books-spanning thesis that innovation springs from the marriage of science and creativity.

So who occupies this art/science crossover zone today? One answer could be Jaron Lanier, who popularized the term “virtual reality” and launched the first VR startup, VPL, long ago in the 1980s. I first heard about VR in an article about Lanier published in Rolling Stone, and was entranced by his vision. Now that VR has reached another stage of development, call it the Vive/Oculus Era, Lanier has delivered a shaggy and entertaining memoir, Dawn of the New Everything: Encounters with Reality and Virtual Reality.

Am I comparing Lanier with da Vinci? Well, no, there really is no comparison. Except, perhaps, that they are both unconventional people driven by a curiosity fed by twin streams of aesthetics and math. For da Vinci, this meant immersing himself in the bohemian currents of Italy. For Lanier, it meant making his way to Silicon Valley in the early eighties in a beater Dodge Dart with no floor, and with hay bales instead of a back seat to better accomodate his goats. Once in the valley, Lanier started working for game companies and found a lucrative side hustle on the hairy guru speaking circuit.

Hundreds of years from now, when the AI historians chronicle these early years of immersive media, Lanier will occupy a role as a soulful prophet of sorts, a hippie mountain man (his term) who sparked the right imaginations at the right time. Lanier’s influence reminds me of that old saying about the Velvet Underground, that not many people heard them at the time, but those who did started bands. VPL may have flamed out like so many other startups, but today’s VR industry wouldn’t exist if it hadn’t been for the precociousness of Lanier’s imagination.

If Leondardo da Vinci is a tale that can only be told within the context of Renaissance Italy, Lanier’s story only makes sense within the context of the tech-addled utopianism of late 20th century California. Lanier portrays the period and place with all the requisite absurdity and wonder, telling stories of tech money windfalls and romantic fallings-out with brilliant women. For readers just getting into VR, he offers some solid foundational history of the technology, but it’s delivered almost tangentially, intertwined with meditations on music, geodesic domes, and what it’s like for coders to date therapists.

While playing the role–or at least wearing the costume–of wild-eyed hippie VR evangelist, Lanier is refreshingly frank about the negative consequences of technology. Lately he’s been sounding off about the pernicious downside of social media. Lanier stresses that VR isn’t an escape from humanity, but a new context for the things that make us human. He sees this technology as a way to re-establish some of the humanity that seems to have been sucked into our screens. This, I think, is why science needs the humanities in order for technology to evolve in a healthy and positive way.

If you’re around Seattle on December 4, take note that Lanier will be speaking at Town Hall, a talk well worth checking out.